You may find us any time, using mdlegwatch.com.

You can view the 2013 site by going to our old WordPress.com site.

Why did we move?  Other than the ads on the free site (they have to pay the rent!), we can do more with a hosted domain.

Please poke around and in a couple weeks, we should start posting pre-filed legislation.  The session starts January 8, 2014.

All Marylanders may contact the Department of Legislative Services (DLS) and request two copies of the Maryland Constitution be sent to their homes.

You may email the DLS. Here are some data we found worthy of remark from the 2013 Maryland General Assembly regular session.

Not all of those bills passed both chambers.  When House bills are passed, they cross into the Senate.

House bills in the Senate:

After these bills pass the Senate, they cross over into the House.

What does all of this mean?  Simply put, once a bill comes out of committee in the House or the Senate, the chance of it passing is nearly 100%.  Only 3 bills that made it out of committee failed in their House of origin.  This is why we stress that it is so important to fight bills in committee.

In 2014, the website will be improved, we’ll make it even easier to contact the committees, and when more Marylanders make their voices heard early in the process, we’ll have even more success.   Here’s to 2014! 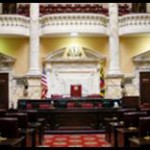 Exciting news!  Maryland Legislative Watch is pleased to announce that we have the 2013 voting records for each Maryland Delegate and Senator!  As far as we know, this has never been done before.

Each record is linked and will display as a .pdf file.  Votes listed are floor votes, only.

Please take some time to view your representatives’ votes.  Does their rhetoric match their voting records?  How did they vote on issues important to you?

We are in the process of doing meaningful analysis on these votes but this is a long, labor intensive process so this will not come out for a couple months.

If you’re in the mood for some light reading, the Department of Legislative Services has available the 2013 session 90 Day Report.  This is issued each year.

The current version is divided into twelve parts and each part addresses an area of public policy.  Area headings:

The Department of Legislative Services includes some analysis.  Unsurprisingly, this analysis is slanted in support of government policies (existing or new).  For instance, the section on SB 281 starts:

The apparent national increase in incidents of mass shootings, and particularly the Sandy Hook Elementary School shooting in Newtown, Connecticut in December 2012, brought renewed focus to issues relating to gun violence and individuals’ access to firearms.

The document goes through the above major policy areas and looks at both passed and failed legislation.  For those who are political junkies, this may make interesting reading. This site lists bills introduced by the Maryland General Assembly (often bad) and the contact information for the appropriate committees/legislators.  You may use the Search function, to the right, to search for topics or sponsors.  (The 2013 session bills may be found at our old site.)

, the email addresses for the sponsor or committee automatically populate in your email client.

The only way we can make a difference is to tell our legislators how we feel about bills.  Most people do not contact legislators about bills - when they hear from enough of us, they listen.

When you contact legislators, please make sure you give your name and district or address - they will ask you for it.

Note:  committees are not final until session starts.